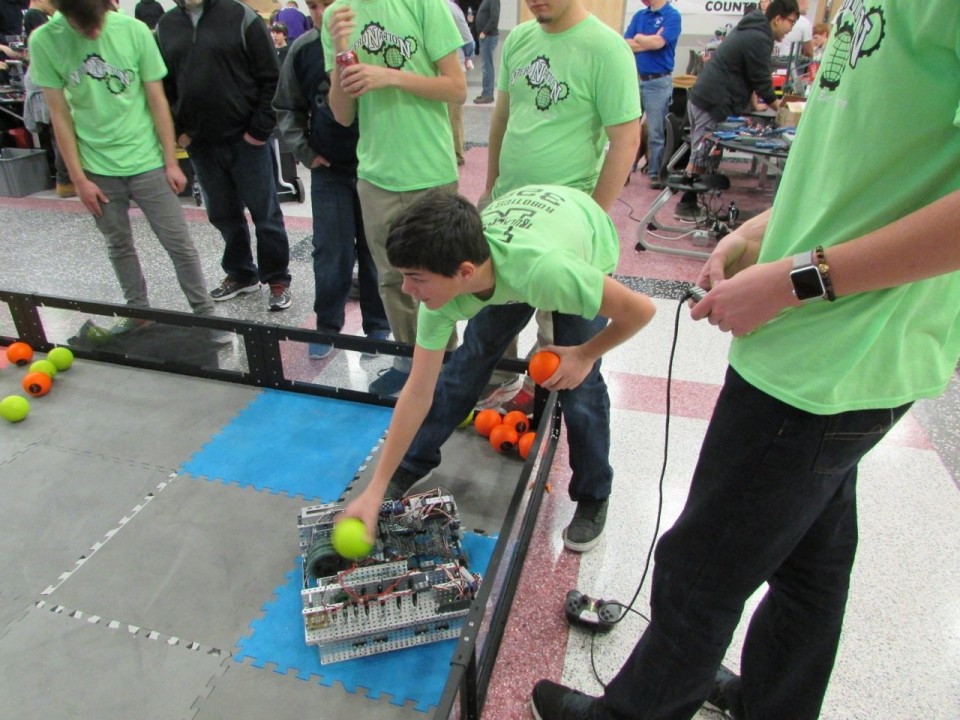 The Robotics competition held on Saturday February 6th, at Brookside High  School combined education and creativity through advanced manufacturing.  Under the guidance of Kevin Landis, Brookside's technology teacher and  robotics adviser, the challenge was for each team to build its own robotic  equipment, then figure out how to do a better job than the a competing team  in having the equipment retrieve plastic balls and hurl them into nets. This is  the first year both middle and high school students participated.

Each year every team buys standardized equipment from VEX Robotics to  use for their entry. Which team does the best job with the same pieces and  parts as everyone else is one measure of skill. How well they deploy their  entries is another. The competition teaches teamwork and is an introduction  to mechanical engineering.

The winners of Saturday's event will compete with other regional finalists to compete in the state competition on March 4 in Marion, Ohio. They also could represent the United States in the world championship games April 20-23 in Kentucky.

Print
Posted by Ashley Jackson in News
Most Recent

Over the next decade, the United States will need to fill nearly 3.5 million manufacturing jobs, but 2 million jobs may go unfilled.

Cleveland, OH---LIFT (Lightweighting Innovations for Tomorrow) is one of nine manufacturing innovation institutes that make up Manufacturing USA. Encompassing five states including Ohio, LIFT is targeting the use of new weight-reducing technologies and materials in industries such as transportation, automotive, aerospace, defense, and bio-medical. Research shows that lighter materials can bring better performance benefits to a range of components and products critical to these sectors. Through the LIFT partnership, MAGNET provides students with work-based learning opportunities including paid internships in lightweighting-related companies throughout the full supply chain. It also provides a financial incentive to companies hiring students. Working with career technical schools and colleges, the project will demonstrate the value of this approach to address the skill shortages in advanced manufacturing and will result in an advanced manufacturing career pathway. MAGNET recently hosted

Ohio Dream It. Do It. Partners